When Bach, in 1720 Bach, returned to Cöthen after accompanying his friend and mentor, Prince Leopold, to Carlsbad, he suddenly discovered that his wife, Maria Barbara, had died of a sudden illness and had been buried. At this time Bach had four children: Wilhelm Friedemann, Carl Philipp Emanuel, Johann Gottfried Bernhard and Catharina Dorothea. The couple’s other three children had died in infancy.

It is the time when he writes the “Sei Solo”, which in Italian also means “you are alone”. Something that has led to many theories, not proven in the eyes of all, but that have stimulated the fantasy of many.

Surrounded by an enormous aura of admiration and respect, endorsed by the fascination of performers and audiences since they were composed around 1720, objects of inspiration and study by any self-respecting later composer, and honored by magnificent performances by the greatest violinists of history, the Sonatas and Partitas for solo violin by Johann Sebastian Bach are, without a doubt, an Everest not only violinistic but absolute in the history of Music.

Its enormous beauty, the perfection of its proportions, the variety of emotions they express, the ingenuity of the use of the violin -capable of performing multiple voices and absolutely transcending its more usually monodic nature- as well as the most diverse theories about its creation and secrets hidden, they place this brilliant music precisely among the most exalted and inexplicable works of art that a human being has been able to conceive and capture, in this case, in sounds.

Not comparable to any previous work for solo violin, nor subsequently surpassed in any musical, technical or artistic aspect, we do not know how many of its precedents Bach knew. Today we have numerous examples of works for solo violin, ever since the instrument that became king in the Baroque period was emancipated from its first role as accompanist of dance or voice, to establish itself as a solo instrument on its own merits: From Baltzar in northern Germany and his preludes and small dances at the dawn of the baroque, Matteys and his “Airs for the violin” in the United Kingdom, Biber with his magical “Passacaglia” dedicated to the Guardian Angel in Austria, even German Westoff with his polyphonic Suites… and many others.

Despite his instrumental emancipation, those rhythmic and danceable qualities of the violin, as well as his vocal capacity, will be enormously present in Baroque compositions.

But Bach goes so far in this exploration that, for example, he dedicates three of his longest fugues to a naturally melodic and non-polyphonic instrument, such as the violin, and exploits its technical and expressive possibilities in an absolutely unrepeatable way.

There are many moments in which Bach borders on that unbreathable atmosphere of distant planets, but equally so are those others where the greatest of the humanities, dances, baroque “affections”, emotions and rhythms emerge.

Surely the fact that Bach, when he arrived in Cöthen, where he worked between 1717 and 1723, found there the best musicians imaginable – a nearby orchestra had just closed, and great instrumentalists moved to work with Johann Sebastian – It was a coincidence that we should be eternally grateful for. In the city that encouraged instrumental music so much, not only was his salary doubled, but he gained the unconditional support of Prince Leopold, an energetic and enthusiastic person who was a particularly passionate patron of the arts. Bach and he developed a long personal friendship. Leopold d’Anhalt-Cóthen was a great amateur and played the violin, the gamba and the harpsichord. Bach commented that the prince not only liked music, but that he knew it well.

In this happy circumstance, he composes much of his instrumental work: the first series of the Well-Tempered Clavier, the French Suites, the six Brandenburg Concertos, the concertos for violin and two violins, two of the orchestral Suites, and numerous series of sonatas. and partitas for 1, 2 and 3 instruments.

Known Bach’s taste for the cycles of 6, explained by some experts and lovers of baroque numerology as the number of perfection and a job well done and finished (God created the world in 6 days, to rest on the seventh, the bees they make their cells in perfect hexagons, and it is the geometric shape that makes the best use of space), these are 6 independent works, divided into 3 Sonatas “da chiesa” and 3 Partitas or Dance Suites. Each of the Sonatas and Partitas has a very definite character.

To begin with, the three “da Chiesa” Sonatas, (a form already established and frequently used in the Baroque), are all composed in four movements, as usual, in the slow-fugue-andante-allegro form. But within this similarity, some experts such as Helga Thöne have wanted to see in them a kind of liturgical motivation, demonstrating according to their own analyzes that each one would be dedicated to one of the most important moments of the Christian calendar, Birth, Passion and Resurrection. Without wanting to go into support or refute this theory (which like so many others want to see a spiritual, Lutheran or even esoteric background in Bach’s music), it is true that some reasons could be found to support it. (It is well known that in the third sonata, for example, the theme of the Fugue is a Resurrection chorale.)

Entering the field of symbolic speculation, and if everything really followed that plan, it would be the First Sonata in g minor BWV 1001 that concerns us today precisely the one dedicated to the birth of Christ, and therefore appropriate for Christmas. Its first movement Adagio, one of the most poetic ever written, may suggest the magic of the starry night in which Jesus is born, as well as his humility and eternity. The Fugue begins its subject with a drawing of the cross (c-h-c-a-h), after three repeated Ds, which could suggest the hammering of the nails on the cross, something widely used as a rethorical figure by Bach in his Passions and Cantatas, as well as in the paintings of the time, where elements of passion appear at the representation of the Birth, prophesying the harsh final outcome. The third movement, a Sicilian, could describe the rocking and cradling of the child

As in the case of the Sonatas, the three Partitas seem to represent, each one of them, a different style within the baroque itself. Also with a very varied and diverse arrangement of the dances in each of them, the First in B minor is composed in the old style, with four movements and four Doubles.

The Second Partita in D minor BWV 1004 is in a very Italianate style, and was written in a key that was reserved in the Baroque for the most important works, and according to Matthesson it has a great, serious and religious affect. Its structure is that of a diptych whose first half is divided into the four most common dances, Allemanda, Corrente, Sarabande and Giga –which follow practically the same harmonic pattern– while the entire other half is occupied by a monumental Ciaccona. The latter goes through the minor and major modes, in turn a triptych, and whose variations explore all the possibilities of the violin. Once again according to Helga Thoene, this Ciaccona would be dedicated to Maria Barbara, being based on funerary Corals. Whether or not this is correct, what is true is that the spiritual and emotional dimensions of the work transcend its sounds so much that many composers have been based on it for other compositions throughout subsequent history.

TheThird Partita in E Major BWV 1006, on the other hand, is the brightest of all the Sei Solos, and is therefore perfect for a midday recital. Its gallant and French style places it as the most « modern » of all: after a grandiose prelude that Bach also uses in a Cantata with organ and trumpets (just close your eyes for the violin to miraculously recall a whole orchestra), the more exquisite and rococo dances dance, one after another, once again reflecting another facet of solo violin writing completely different from the Sonatas da Chiesa. Loure, Gavotte en Rondeau, two Menuets, Bourrée and Gigue, close this cycle with the greatest optimism and the most exultant grace.

The nature of these sounds seems sometimes as abstract as the mythical “Kust der Fuge » or “Musikalisches Opfer » and other times of a universality in their irremediably human emotions. No self-respecting violinist avoids studying them throughout his life and letting their wise vibrations soak him or her.

There are also many moments in which this music, as Friedrich Nietszche said regarding art in general, « offers us the consolation of the knowledge that it itself provides us. 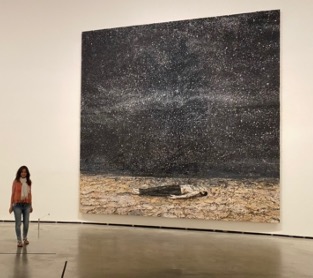 The immensity of this work, combined with the innate fragility of the small but powerful instrument, result in an enormous sonorous and artistic poetry and grandeur, a melodic thread that multiplies in the numerous simultaneous voices, weaving the polyphony of this superb work.

Given all this display of genius, perhaps one of the greatest approaches to perfection that has occurred in the human spirit, my attitude as violinist, armed only with my small instrument with just four strings, resembles that painting by Anselm Kiefer in which a man lying on the ground contemplates the starry sky, which occupies most of the canvas.